What are some of your go-to emotions? For some, anger or rage have a hair trigger. For others, judgment and defensiveness are go-to emotions. For others, shame, guilt or invalidation. These emotions activate before you have a chance to pause and choose a response. Instead you react. The flip is switched, and you’re fully enrolled. Go-to emotions are examples of Programming.

There are other patterns and behaviors that are types of Programming as well. For example, caretaking, empathic sensitivity, victimization, negative self-worth, blaming others for your experiences and problems. Programming.

From an energetic standpoint, Programming is emotional energy, coalesced around the patterns, behaviors, emotions that are generated when triggered. In other words, you could have waves of rage programming as well as waves of victimization programming running in your field, if both of these patterns are a big part of your experience of yourself and your interactions with others. We all have different types or varieties of programming because we’re all different people, and our stories and Karma inform our experience.

Programming is largely unconscious and operates as systems of thought, behavior and action.  It functions a lot like a circuit board, once the components are defined and assembled, the circuit board will operate predictably and repeatedly. Unless the circuitry is rewired, the programming is in place and operational. Programming represents conditioned patterns of thoughts and belief.  They assemble as interconnected pictures (emotional energy) resonating across multiple chakras and their correlative layers in the aura. 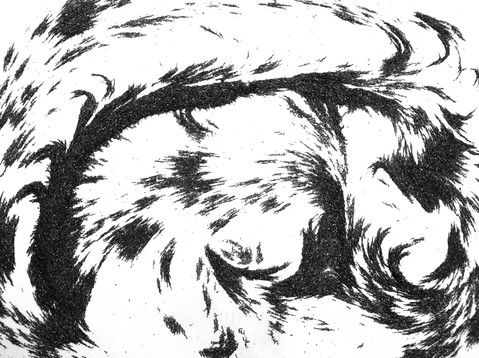 A picture in a chakra or the aura is about the size of an iron filing – miniscule unless enlarged psychically to identify the energy of the picture. When a behavioral pattern is in place, the emotional energy of that pattern coalesces in the aura. The pictures vibrate at the same frequency, thus they compile themselves in waves in your aura. When viewed clairvoyantly, they’re perceived like dust filtered through sunlight, in loose, slow-flowing waves.  It’s a random pattern of miniscule, yet vibrationally similar pictures in motion together in the energy field.

Programming is never about current time, about present moment awareness. It’s energy from there and then, activated by a hair trigger in the here and now. Whatever your patterns, they may once have been effective, but anything that is dragged from any other moment than right now is not authentic. Most of us have large bands of energetic Programming housed in the aura.  It’s interesting to observe yourself when Programming is running.  You might notice that you communicate with increased vehemence or perhaps applying a drone-like tone that wasn’t present prior to the activation.  Sometimes an implied assumption or projection emerges that “most people” feel the same way as you do about whatever concept is being discussed.

Releasing Programming to the rescue!

I think you’re going to enjoy stepping out of the patterns and behaviors that you’ve landed in over time. It’s so freeing to be on the other side of a pattern or behavior because it’s been largely cleared from your field. You’ll have an experience, respond differently than your Programming would dictate, and perhaps not even notice until after the interaction is completed and you have a moment to reflect on the difference in your behavior. I want that for you! I want that for all of us!

Releasing Programming streamlines the healing process, and as you deepen your understanding and awareness of energy and clearing strategies, you’ll see that it’s quite effective.  Integration is the key to advanced clearing skills, so a solid understanding of the concept, as well as how Programming has informed your experience prior to release is important.

Family systems operate under a set of rules, belief systems, behavioral constructs and acceptable norms that are internalized and applied throughout life. As an adult, some of your familial Programming may no longer resonate and feel true or appropriate for you. Say hello. Release your familial Programming and notice what emerges in your relationship to yourself, as well as your family members. I can’t promise you that moving out of the familial rules and norms will be an easy or comfortable thing. You may have new boundaries to establish or bumpy emotional waters to navigate. If you are more of Who You Are, everyone with whom you interact has an energetic invitation to be more of Who S/He is. That’s always a good thing, even if it means closure or transition.

Large operating systems like religious and cultural or tribal affiliations, corporate cultures, spiritual communities, political parties, even states and countries have institutional Programming that inform our thinking. As a liberal or a conservative, there are different ways of thinking that frame how you experience the world around you. As a Catholic or a Jew, your religious beliefs, values and practices are deeply internalized and influence behavior and action. If a system no longer fits your worldview and sense of self, walking away and joining another system is an option. Releasing your institutional Programming will free up your unconscious thinking, choices and behaviors that resonate with the system you’re leaving behind.

When you operate through authentic, grounded awareness, you’re in current time, and you are able to choose a response rather than run a program.

Practitioners and clients often report seemingly spontaneous changes in how information is received, processed and filtered – without pre-conceived biases, beliefs or assumptions coloring their perspective. These shifts often precede or coincide with fairly dramatic evolution and healing in the body, thought processes and belief systems and/or emotional awareness.

What Karmic theme are you exploring?

When you began working on Karma, you chose a theme or pattern that you’d like to evolve. Whatever it is, think about it for a few moments. Meditate on how the Karmic theme or pattern may be informing your Programming.

If invalidation is a theme you’re exploring karmically, you’ll likely have Programming that generates feelings of unworthiness, not being good enough, feeling judged or belittled.

If caretaking others is a theme, you’ve got Programming that compels you to jump in and rescue, or that fosters feeling good about yourself only when you are in service to others.

If self-hatred is a theme, you’ve likely got Programming that triggers contempt, judgment, belittling, and/or negative self-talk.

Using the Big 4 Aura skills and the chakra clearing skills to work on a Karmic theme and its manifestations that occur because of your Programming, Agreements and Contracts, Emotional Energy and Cords, you’re bringing major tools to the foreground to support your evolution.

Think about this concept of using all the tools you’re learning as a practice, with an intention to create and manifest new behaviors, experiences, relationships that resonate with Who You Are. That’s the purpose of these clearing skills.

Move to the next Topic in the Lesson and download the mp3 and pdf files, and practice Releasing Programming.